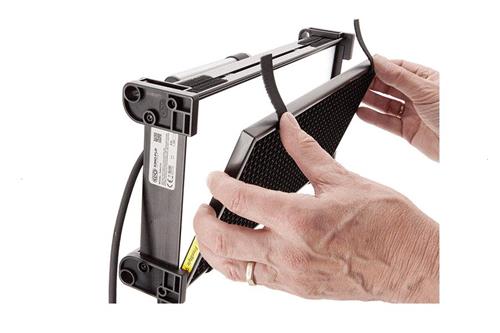 A few years back we have been asking Kino Flo whether there were any plans in making smaller, more compact LED fixtures.  It seems there was a never-ending parade of large and super large lighting fixtures coming out of the major LED manufacturers to satisfy big Hollywood studio projects, where large format lights are in great demand for chroma keying and other expanding studio sets.

Then last year NAB we were given a preview at their booth of what is now known as the FreeStyle Mini light, which at that time reminded me instantly of the discontinued 2-bank compact fluorescent light that used to be called the Barfly 200D fixture.  The Barfly 200D uses two compact quad fluorescent lamps, which require the user to switch daylight or tungsten colour temperature lamps when the occasion arises.  The new FreeStyle Mini uses arrays of LEDs based on RGBWW and can reproduce daylight, tungsten colour temperatures, as well as standard and custom gel colours at the touch of the buttons on its ballast.  The photometrics on the old Barfly 200D was brighter at 13 Foot-candles at 10 feet but uses more power at 252 watts, whereas the new Freestyle Mini is rated at 9 Foot-candles at 10 feet and uses 100 watts.  Unlike the Barfly however, the FreeStyle Mini does not affect colour shift when dimming from 0 to 100%, and it is flicker-free even at high camera speeds. 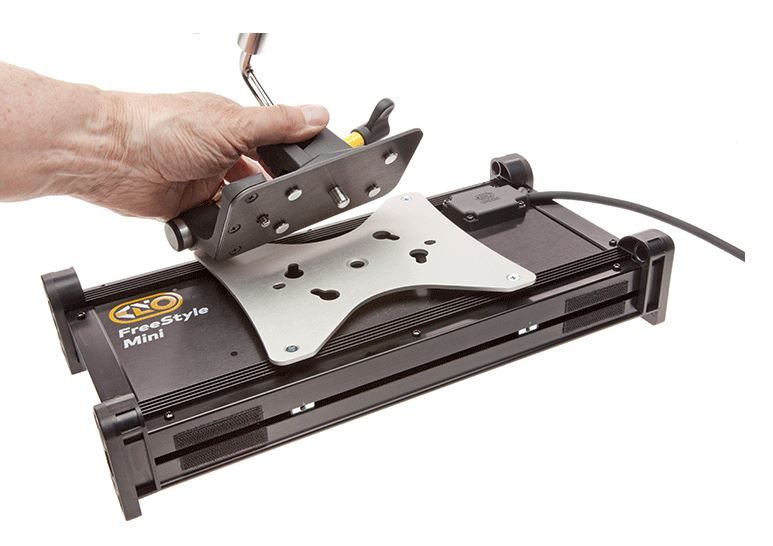 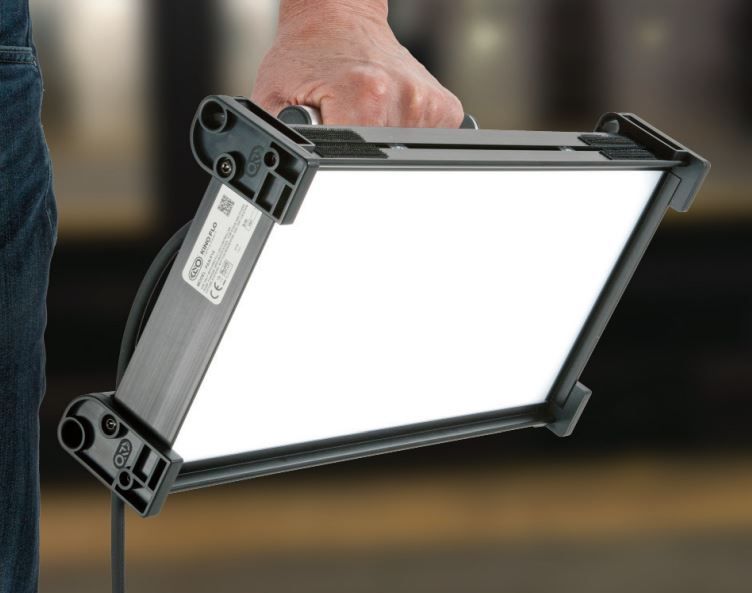 Compact out-of-the-way soft and beautiful lighting was the original intention of the predecessor Barfly, and the new LED replacement FreeStyle Mini is no exception.  The FreeStyle Mini can be placed in tight spaces and be powered by AC (universal voltage) or DC (24 VDC).  Its ballast can power two light heads simultaneously, while DMX control (both hardwired or wireless can be used) and modifiers like softbox and eggcrates are also available to further shape the light.

Kino Flo has packed a lot of features in the FreeStyle Mini fixture that may not be so obvious at first glance.  For instance, one of Kino Flo’s core principles to LED lighting is to design fixtures that are used for longevity.  Some LED manufacturers overdrive their LEDs to achieve a certain maximum high output, which will eventually compromise their half-life or accelerate their natural aging process, as all LEDs degrade and dim over time.  Half-life is defined in hours of how long a light source will reach 50% of the light output during its rated life, which is typical around 50,000 hours for LEDs.  A typical LED light source will reach its half-life in about 3 years’ time if it were to be operated in a 24/7 continuous environment.  Kino Flo mitigates this aging process by underdrive all the LEDs, and compensate the loss of output by adding more LEDs back into their fixture, in addition to other appropriate measures like efficient cooling designs, etc.

More features that may not be so obvious are small details like the ability to operate the menu settings while the fixture is in the OFF position.  As long as there is power feeding into the controller, the screen will light up and all the settings in the menu can be accessed.  This is useful while you are loading your preferences for the light, but without disturbing the people on set with unwanted light.  On the topic of disturbing people, the FreeStyle Mini has a very quiet active cooling system, and hence the sound operator on set would be another appreciative person.  It is good to know that the new FreeStyle Mini still adheres to the original intention of the Barfly light 10 years ago, a light that gets the job done without drawing attention.

Like any innovative hybrid or electric cars, any sophisticated hardware system requires equally sophisticated software to run its engine smoothly, and the FreeStyle Mini is no exception. Firmware version 4.0 can be download via the Type Mini B USB port on the controller, can be downloaded free-of-charge directly from the Kino Flo website.

With version 4.0, users can enjoy four camera profiles (Arri Alexa; Sony Venice; Panavision DXL; Panasonic Varicam with more to come) to align their cameras with their Kino Flo lights.  Another new feature is the ability to input CIE X and Y coordinates to match other lighting fixtures onset, based on metering results from using a light meter like the Sekonic C-800. 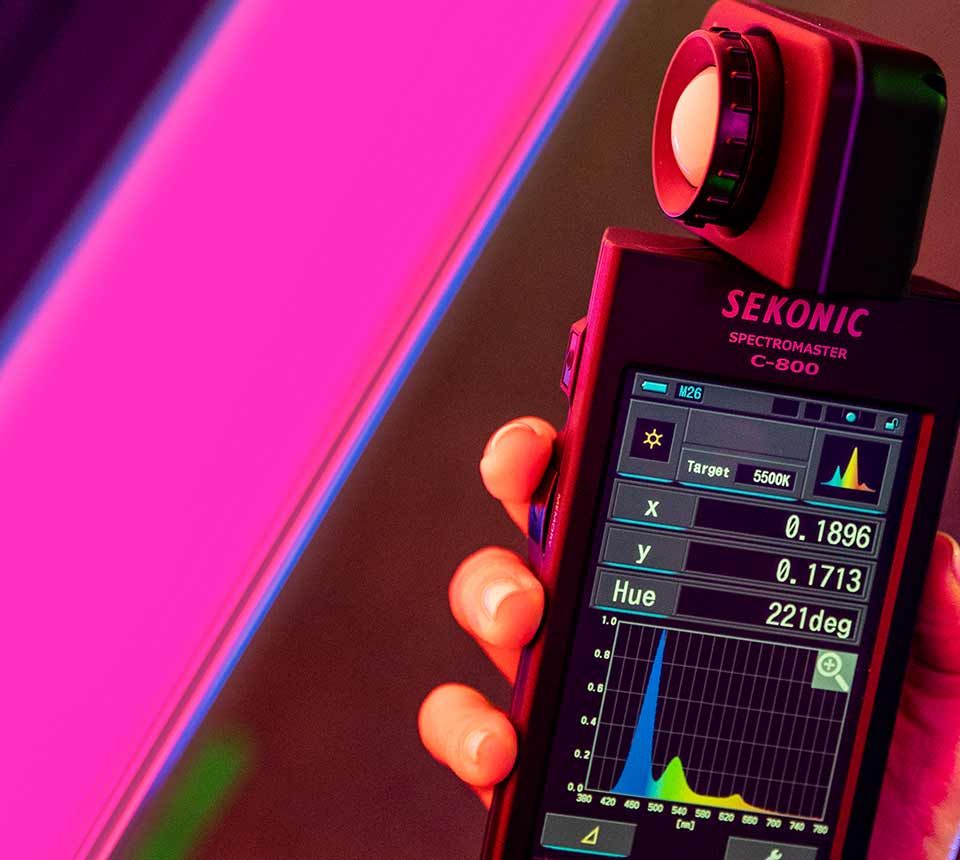 Last but not least, the setting Color Space, which defines the RGB colour space (white point and RGB primary colours) is a means of matching colour points between manufacturing.  Defining the colour space takes the guesswork out of post-production workflow and colour grading.  Included in the 4.0 firmware are: rec 709/sRGB, P3 D65, rec 2020, and ESTA E1.54.  Kino Flo has put front-and center the importance of their colour science, as it relates to image capture and workflow onset.  We will revisit this topic further in a future blog post.

Wouldn’t it be wonderful if Kino Flo can put out a detailed operator’s handbook on their LED lights, like what Panasonic did with the EVA1 camera (written by Barry Green), or what Sony did with the FX9 camera (written by Allister Chapman)?  In the meantime, feel free to use HD Source as your guide to all things Kino Flo.  Please reach out to us by calling 416-251-1571 or by e-mail at sales@hdsource.ca