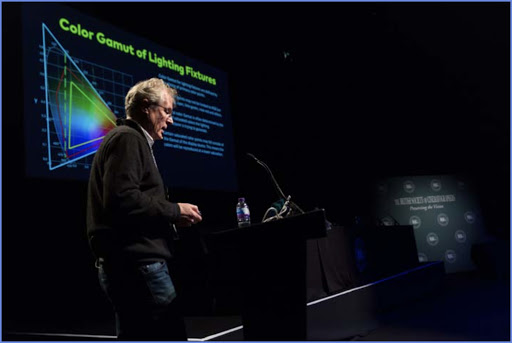 The world of film lighting is changing rapidly, and manufacturers for cinema cameras and LED lighting have been busy coming out with new approaches to colour sciences, and the technology is still evolving.  When LED lighting first came out, we have a dedicated white light source (daylight or tungsten), and then cool and warm light sources were added onto a single fixture which we called bi-colour.  Then manufacturers were adding red, green, and blue (RGB) to create theatrical and cinema colours on-board that closely resemble gels from companies like Rosco and Lee.  More innovations came along with companies adding bi-colour source onto RGB fixture, turning it into RGBWW arrays.

Now here we are in 2020, we have lights that have RGBWW with other companies extended this colour palette even further to include R (red) G (green) B (blue) L (lime) A (amber) W (white) from Rosco DMG Lumiere’s Mix Technology, and ETC’s X8 Colour System with R (red) DR (deep red) G (green) B (blue) L (lime) I (indigo) C (cyan) and A (amber).  To have these added options on a light fixture seems amazing at first, giving you the convenience factor of dialing in a colour onset can be time-saving, and time is money.  However, do we need to have a greater understanding of colour science before we can fully utilize these tools at our disposal, with an appreciation of how we can deploy these new tools onset with accuracy and repeatable results?  Luckily the film industry has Freider Hochheim, the founder of Kino Flo, to guide us through this technological maze. 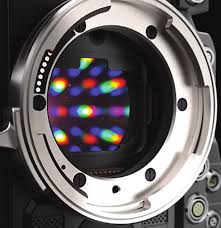 Mr. Hochheim, who founded Kino Flo some 34 years ago, is no stranger to film lighting.  His fluorescent tubes and high-frequency ballasts were used throughout the world when Kodak and Fuji films were still the dominating medium.  His understanding of the spectral response curve of these films allows his True Match lamps to be colour-accurate without green spikes, unlike typical household fluorescent tubes.  His high frequency ballasts, a technology taken from Xerox’s research on photocopiers, allows images to be captured without flickers.  His latest focus is on how to utilize colour science to allow onset uniformity across multiple lighting and camera manufacturers.  The following lecture was given by Mr. Hochheim during the Toruń, Poland film festival Energa Camerimage on November 11th, 2019.  These videos are posted on Youtube by lighting dealer BBP Light of Amsterdam Netherlands in five shorter segments:

Kino Flo – LED Colorimetry for Cinema Chapter 1 – (Highlights) – Intro to Colour Science; Principle of Full Spectrum “White Light”; various spectral measurement indexes; differences in “White Light” spectrum; Planckian Locus (below the curve will have a Magenta cast and above the curve will have a Green cast – RGBWW helps raise bi-colour closer to curve); understanding colour gamut on various devices like camera, lighting, and display; challenges of colour matching between manufacturers of lighting.

Kino Flo – LED Colorimetry for Cinema Chapter 2 – (Highlights) – Colour Measurement Indexes; Sekonic C700/800 based on average spectral responses of HD-SLR and not on Cinema Cameras; Stop using CRI rating; IES TM-30-18 with Rf (Fidelity index) and Rg (Gamut index); High TLCI rating can still display high green or magenta shift; SSI rating may help with identifying differences between lighting manufacturers, but does not relate to the spectral sensitivity of the camera; Camera does not necessarily see the same thing as what the eye sees; create a Custom Spectrometer to understand the spectral response curve of each cinema cameras, rather than use off-the-shelf light meter; Arri Amira versus Red Mysterium versus Panavision 8K Red; different camera sees different CCT values than scientific spectrometer CCT values; Gel corrections based on position of the Black Body Curve for accurate flesh tone reproduction.

Kino Flo – LED Colorimetry for Cinema Chapter 4 – (Highlights) –Differences in “White Light”; Phosphor Whites; RGB; RGBW; RGBA; RGBWWCW; RGLGBWA; RRRGLGBWA; Not all “White Light” is the same; Camera Test; Use RGBWW to raise the curve to the Black Body Curve; LED mixing light accuracy on tungsten may not result in the same accuracy in Daylight with the same camera.

Kino Flo – LED Colorimetry for Cinema Chapter 5 – (Highlights) – Matching “White Light” and Camera Profiles; X/Y coordinates and the variance in spectral distribution; ShowTool Swatch and Lee Gel Apps;  Native Gamut is determined by their RGB points; same RGB input values may render out differently between different manufacturers; ESTA and Kodak ProPhoto Colour Space; D65 White Point; A call for lighting manufacturers to map their colours in X/Y coordinates; the option of defining colour points in a common gamut; General Kelvin may be easier to match between lighting manufacturers than saturated colours; Putting Camera Profiles in a lighting fixture to output neutral white for accurate skin tones; Gels on a full spectrum white LED light may render saturated colours better than the limited range of the Gamut range of fixture; the resurgence of  “lamp operator” in today’s complex nature of lighting; Rembrandt and Vermeer; producers and cinematographers; test your choice of camera toward your lights; Conclusion.

Based on Mr. Hochheim’s lecture, it seems digital cinematography is still in its early infancy. With so many LED lights and cinema cameras offering different approaches to colour sciences, we need a unifying standard that can harmonize these tools together onset.  At the least, we need a portable spectrometer that can see what a specific cinema camera sees as neutral white (D65), and how to correct it if it deviates from the Black Body Curve.  More and more LED lights and cinema cameras have a USB port onboard that allows for future firmware upgrades.  The possibility of more upgrades in the future is definitely on the horizon, as the colour science has yet to be standardized.  In the meantime, don’t throw away your gel collections.